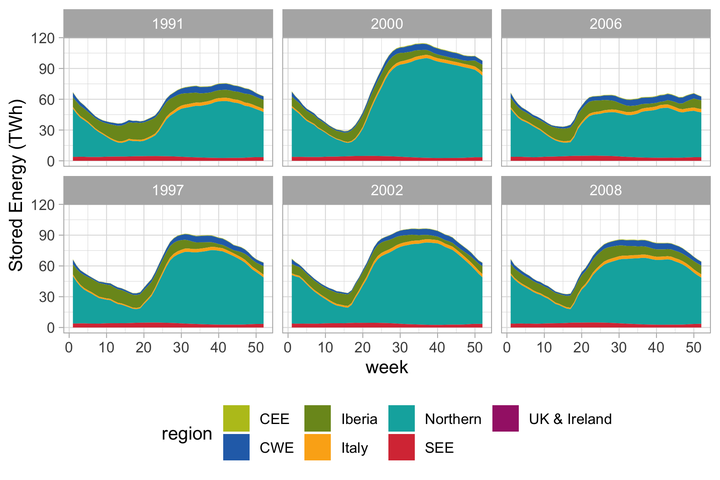 Our report “Power system flexibility in a variable climate” assesses the impact of the annual variation of meteorological factors – the climate variability – on the operations of the power systems in 34 European countries that jointly constitute the interconnected European electricity systems. It covers important aspects such as CO2 emissions and use of freshwater for cooling of power plants, and estimates their sensitivity to the changing climatic conditions. Changing weather conditions affect the operation of the European power systems. The output of renewable energy sources fluctuates depending on the availability of wind, cloud cover, or water levels in reservoirs, while the output of dispatchable generators, such as gas turbines, must be adapted accordingly to ensure that supply and demand are balanced at all times. The link between meteorology and power systems also manifests itself through other aspects such as the demand for electricity, affecting the operation of power markets, and thus power prices, emissions, and use of resources (fuels, fresh water etc). Today more than 40% of the European electricity generation capacity is heavily dependent on climatic factors. This dependence is expected to increase in the future as Europe transitions to a carbon-neutral economy. This work is based on a set of simulations carried out with the Dispa-SET power system model, developed by the JRC, using hourly datasets for wind and solar capacity factors, electricity demand and hydropower inflows based on actual meteorological conditions. The simulations reproduce the behaviour of all the European power systems, as they operated in 2016, using a set of 26 different climatic conditions as inputs.