Wind and other CO2-free assets replacing coal in 2030 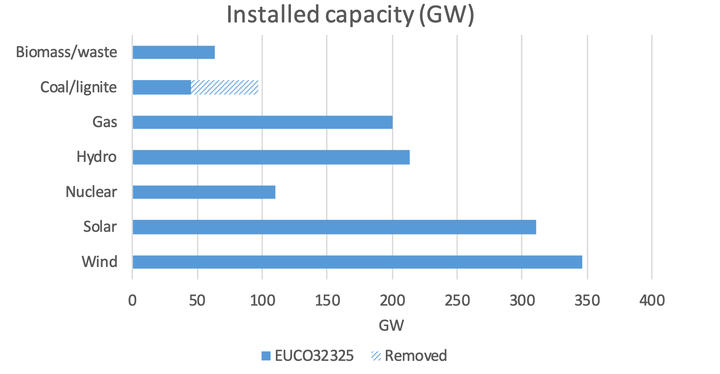 An up-to-date partial coal phase out scenario based on the power system and prices defined in the EUCO3232.5 scenario for 2030 is analysed with the METIS power system model. Following the removal of coal and lignite fleets in excess of half the capacity present in the EUCO scenario, the power system experiences more often power scarcity, primarily in the Central-West region of Europe. The study explores the potential of new wind capacity to fill the vacuum created by the coal fleet retirements both in energy and capacity terms. The conclusion of the previous similar study of 2018, that new wind capacity predominantly placed in peripheral regions of Europe (South-east, South-west and the North), has the potential to balance the system was tested for multiple climatic years. The modelling analysis showed that new capacity consisting of 85 GW of additional wind power (compared to the EUCO3232.5) supported by additional infrastructure would be sufficient to restore adequacy. The additional infrastructure identified in this study consists of approximately 8.2 GW of batteries, very limited new peaking generation (up to 0.5 GW) and 53 GW of interconnection upgrades. The interconnector’s role as a definitive enabler, not only of market integration but also of a path towards a renewables-based power system is strongly supported by the results. The identified transmission upgrades alone have the potential to reduce the carbon footprint of the European power system by more than a quarter, compared to the EUCO3232.5, with minimal additions of peaking capacity. In a scenario variant where no additional wind is added to the system, the modelling results indicate that only an additional 4.2 GW of peaking capacity (OCGTs) and 14.8 GW of battery storage on top of the EUCO3232.5 capacities, would be sufficient to restore adequacy to the power system, following the assumed coal fleet decommissioning. In a second scenario used to benchmark the results, with no interconnection upgrades we find that the flexible resource requirements rise sharply to 21 GW of battery storage and 22.3 GW of thermal peaking capacity. The cost of the additional infrastructure was estimated for all scenarios and benchmarked against the potential CO2 savings. Under the EUCO3232.5 fuel price assumptions replacing coal with wind power would lead to an annual additional cost ranging between 1.9 and 4.5 € Billion which would correspond to an incremental abatement cost between 7.4 and 18.2 €/tonne CO2 in 2030.