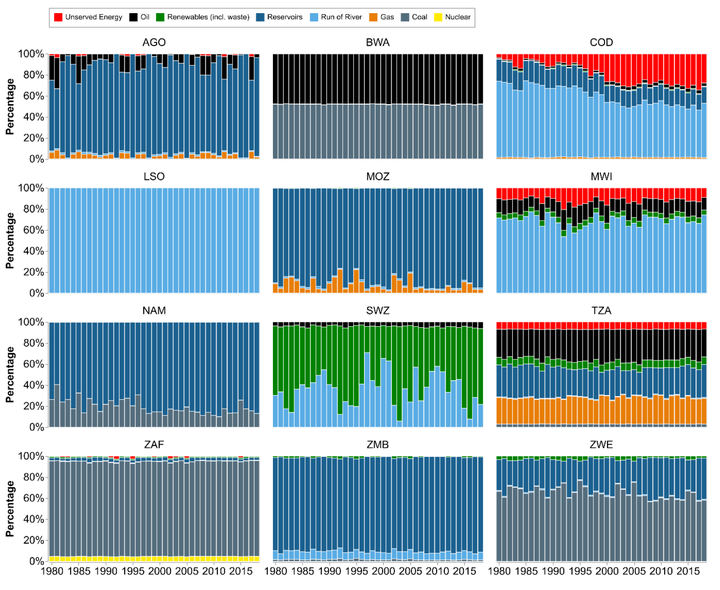 The countries in the Southern African Power Pool (SAPP), albeit heterogeneous in terms of their economic development including the maturity of their energy systems, face the joint challenge of having to expand and transform their electricity infrastructure. This is on the one hand driven by the need to serve demand that is expected to grow sharply in order to provide for electricity access, and to keep up with projected population growth and economic convergence. On the other hand, changing climatic conditions have immediate implications for the electricity generation in the SAPP. A large share of countries rely on hydropower as their primary generation option and currently major rivers, such as the Zambezi or the Congo feeding the water storage reservoirs in the region, are subject to significant variability of their mean annual discharge. This variability, which is particularly high in the fall season, is confirmed through the analyses carried out for this report. To help understand and address these challenges this report provides a knowledge base by describing the SAPP power system for the years 2016 and 2017 and by testing the performance of the SAPP through a model-based analysis against a broad range of inflows to the hydro reservoirs derived from an ensemble of 39 historic climatic years. Our analysis, which is openly available through the JRC Data Catalogue, reveals that the resulting inflows vary considerably, in particular during the fall season, and that this variability affects the hydro generation output differently depending on which SAPP country is considered. On the low end of the spectrum is the share of hydro generation in South Africa which remains pretty constant reaching up to 5%, while on the upper end is the share of hydro generation in Mozambique which shows a considerable variation between around 40% to more than 100%, where the latter case is associated with the climatic years where Mozambique acts as an exporter of electricity to the SAPP. The variable hydro output significantly goes along with economic impacts in terms of unserved energy and high electricity price levels; this is in particular the case when a country is both relying on high shares of hydro generation and not interconnected to other countries in the pool as it is the case for Angola and Malawi in the studied years 2016/2017. In these two countries, as well as in the Democratic Republic of Congo, which according to our analysis lacks adequate generation capacity and is only weakly interconnected, unserved energy and electricity prices can increase by a factor of three to four with low levels of hydro generation output. For the other SAPP countries the variability is more modest since they broadly benefit from (excess) availability of South African base load generation capacity, most notably coal that can be made available to the other SAPP countries through the interconnected system. This report also investigates the possible consequences of a capacity shortfall in South Africa, which has happened historically due to extreme flooding events, and sheds light on the benefits of expanding interconnections among SAPP countries by implementing all currently planned projects, both in comparison to the reference situation and to the capacity shortfall. Our results show that capacity shortage in South Africa would negatively spill-over to other SAPP countries in terms of increased levels of unserved energy and electricity prices. Contrary, an increased interconnectedness of the SAPP power system allows the currently unconnected countries to participate in the gains of pooling resources and overall, by providing more flexible paths for the electricity to flow, increases the resilience against electricity supply interruptions. By comparing the capacity factors of interconnectors for a broad range of hydro-climatic conditions, we identify promising candidate projects for new interconnection capacity additions or expansions respectively that can be assessed further in more detailed analyses. In terms of socio-economic impacts, increased interconnectedness is reflected in an overall significantly reduced and smoothed distribution of electricity price and unserved electricity levels.